Not a lady afterall. 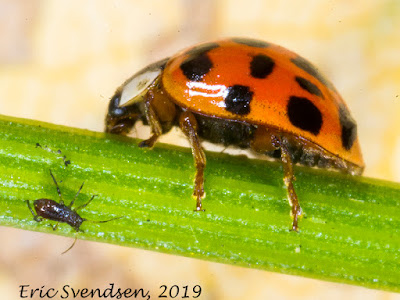 Thirteen spotted ladybird beetle hunting for aphids. Ladybugs are not bugs, nor are they ladies.  The ladybug, more appropriately called the ladybird beetle, is a friend to farmers and gardeners alike.  The ladybug got its name during the middle ages in Europe.  It turns out the farmers were having quite a tough time with an outbreak of aphids.  They must have been Catholic because they prayed to The Virgin Mary for help.  Not long after the crops recovered from the infestation, delivered by a host of ladybugs.  I guess they didn't care for the name marybug and the term ladybug stuck. The story above is one of many possible explanations of how the ladybug obtained its moniker (reference:  click here ).  Whether true or not, the title is ubiquitous and these beetles are found worldwide.  In Canada alone, there are 150 species.  Altogether there are about 5000 species.  Ladybirds, like all beetles, have complete metamorphosis.  Their development goes from an egg to larva to p
Post a Comment
Read more

The maze of life. 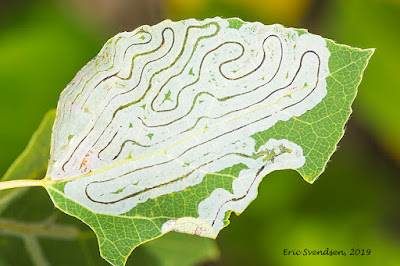 The skeletonizing of a leaf by a leaf miner. Born to tunnel; a simple egg laid on a leaf produces a tiny caterpillar.  It immediately becomes an industrial machine, boring into the leaf and consuming the matter between layers.  Barely visible to the human eye, it proceeds in a relatively straight line until it finds an obstacle.  Undeterred, it changes direction and continues its momentum; becoming larger with each centimeter consumed.  The tunnels become larger and its progress faster.  Soon it has consumed almost half an entire leaf.  Thwarted by the main vein running through the middle, it is now large enough to chew through the tougher structure.  Continuing the destruction, the caterpillar finds an outside edge.  It is time to rest.  Spinning silken web, it makes a bed out of the very vegetation it has been consuming.  When it wakes, it will no longer be a caterpillar, but a newly emerged moth bent on laying its own eggs to start the cycle all over again. This caterpillar is
1 comment
Read more

Willow sawfly larvae; not a caterpillar. 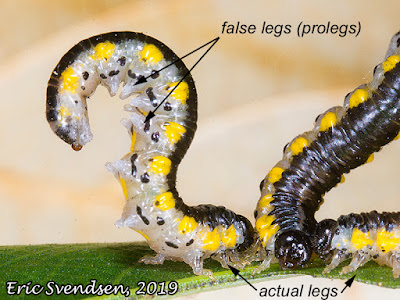 Willow sawfly larvae feeding on a willow leaf. Insects can be very hard to identify, and sometimes even getting the right group of insects can be challenging.  The above photo of a sawfly larva is a good example. Initially, one would probably mistake these caterpillar-like creatures as being either butterfly or moth larvae.  Both sawflies and lepidoptera (the group butterflies and moths belong to) have similar looking young.  The easiest way to tell if it is a caterpillar or sawfly is by paying attention to the prolegs. Prolegs are those peculiar suction cup type feet that exist at the back end of caterpillars.  We know all insects have 6 legs, so why do caterpillars seem to have so many more?  It turns out the first three pairs are the true legs.  The caterpillar's head is close to them.  The rest of the caterpillar has a series of false legs, called prolegs, which continue to the end of the individual.  The number of proleg pairs will help identify if it is a sawfly larva
Post a Comment
Read more 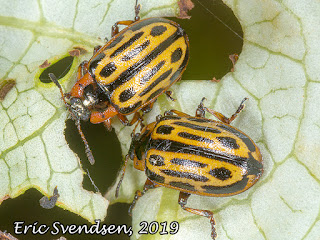 A pair of cottonwood leaf beetles, on a cottonwood leaf. Cottonwood is a kind of tree which is usually found around fresh water.  It grows fast and the trees themselves can become very large.  They only live a short time (for a tree) though, around 80 years, and leave their remains as fodder for all kinds of creatures.  The trees are important because of the stabilizing properties they have for banks and beaches.  While alive, the trees are a favourite food of beavers (the bark) and the leaves are consumed by numerous mammal and insect species.  One of those is the cottonwood beetle. Cottonwood beetles reproduce rapidly and can spawn several generations in a season.  Although cottonwood is their primary food source, they will also take poplar, willow, and aspen.  In large numbers, these insects can defoliate a tree and are serious pests in management areas.  As summer ends adults will find their way under bark or leaf litter on the ground.  Those that survive predation and the sc
Post a Comment
Read more 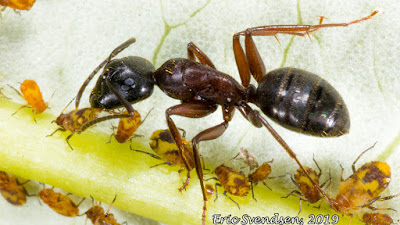 Ant milking an aphid for honeydew liquid. The above photo represents one of the best images I captured this summer.  While camping near  Salmon Arm this summer I would spend part of my day wandering about with my macro gear.  I came across a busy ant colony and discovered that they were "milking" a herd of aphids.  Ants stroke their antennae across the back of an aphid and it responds by secreting a drop of sugary liquid from its abdomen.  The ant consumes the liquid and brings it back to the colony for dissemination.  This relationship between the aphid and the ant is a form of symbiosis called mutualism.  Both species benefit; the ant gets the sweet liquid and the aphid is protected.  Ants guard their aphids not so differently from the way a farmer guards a herd of cattle.  They protect them from predators such as ladybugs which will voraciously consume the little sugar factories if left unguarded.  One ant by itself may not be much of a threat, but if they swarm the
Post a Comment
Read more 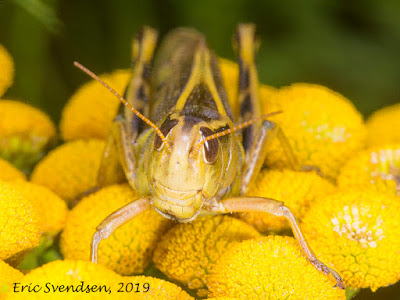 Two-striped grasshopper on common tansy. Have you ever found an insect and wondered what it was?  This is a query I am frequently burdened with.  I like to know the name of what it is I am looking at and to understand something of its life habits.  To facilitate this search for information I often refer to my insect guides. The problem with insects is that there is an unbelievable variety of them.  They are grouped into a total of 31 orders; each order is made of insects of a similar nature.  Butterflies and moths belong to the Lepidoptera.  Grasshoppers and crickets belong to the Orthoptera.  If you want to look at a complete list of insect orders, click here . The first chore is to figure out the order an insect belongs to.  This is important because it streamlines the search for the investigation.  There is no sense in looking for a beetle (Coleoptera) in a true bug (Hemiptera) category; it just won't be found.  Fortunately, it is not very difficult to get identification
Post a Comment
Read more

How to get rid of a wasp's nest. 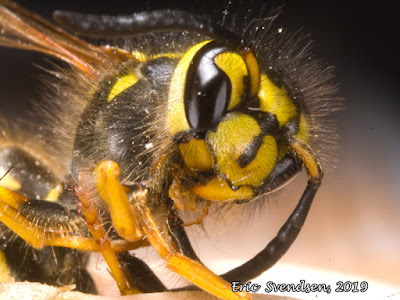 The yellow jacket wasp. Yesterday I was busily working on some yard work when I looked up and saw a most uncomfortable sight.  Wasps had moved in.  A small nook in my deck cover was now the home to a yellow jacket wasp colony.  If I have learned anything about wasps during my time on Mother Earth, it is that wasp nests only get bigger over time.  It is better to deal with them now rather than later.  It is one of those problems you simply cannot ignore and hope it goes away.  If you have ever played one of those computer games where you obtain resources and build an empire, the development of a wasp nest is something like that.  A single wasp, a queen, slowly constructs a tiny enclave in some hopefully safe spot.  Foraging for food, she builds a nest, lays her eggs, and tends the young until they mature.  These underlings then go on to forage, build, and tend in a slowly exponential manner.  Soon, small becomes big, then big becomes huge. I was at the point in the "game&
Post a Comment
Read more
More posts